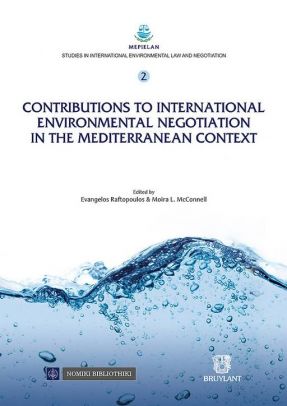 CONTRIBUTIONS TO INTERNATIONAL ENVIRONMENTAL NEGOTIATION IN THE MEDITERRANEAN CONTEXT

This second Study in the MEPIELAN Series “Contributions to International Environmental Negotiation in the Mediterranean Context” primarily comprises a collection of the papers and simulation exercises that were originally designed for and used at the first of the MEPIELAN international negotiation seminars. The Seminar, held in Glyfada, Greece in 2002, was the first strategicstep by MEPIELAN in a conscious process of engagement between academics, researchers, emerging scholars and future negotiators and those whose daily work it is to negotiate environmental agreements in the region.

Part II presents specific contemporary issues and trends that are affecting both the negotiation process and the substance of environmental agreements. The first presentation, prepared by Dr. Moira L. McConnell, then Professor of Maritime Affairs at the World Maritime University (University located in Sweden and within the UN system) and currently Professor of Law and Director of the Marine & Environmental Law Institute at Dalhousie University in Canada, considers the impact of increased reliance on science and scientists on international environmental negotiations and their pressure for certainty in negotiations over standards. The second presentation, also by Dr. McConnell, considers the impact on environmental negotiations of changing institutional responsibilities and organizational cultures arising from what some describe as a convergence of security and defence and environmental/ human security/health concerns.

Dr. Tullio Scovazzi, Professor of International Law, University of Milan (Bicocca), draws on his experience with the development of the UNESCO Convention the Protection of Underwater Cultural Heritage to examine the interaction between culture and “nature” in the Mediterranean context. Ms. Marie Soveroski, Director of the European Centre for Judges and Lawyers, the Luxembourg Antenna of the European Institute of Public Administration, focuses on the impact of the European Union on international environmental negotiations. In particular the exercise developed for her presentation (which is included in full in Part III of this Study) provides an opportunity to consider the effect of EU unification measures, such as EEC Directives, on the international negotiation process and State autonomy in the context of negotiations. A final paper in the collection prepared by Dr. Elli Louka, President of ADI (Alphabetics Development & Investment), a company devoted to environment and development, although not part of the original seminar presentations has been included by the co-editors because of its relevance to the concepts promoted in this Study. It examines the idea of consensus building through application (practice) in the context of integrated area management experiences in the Mediterranean.

Part III of this Study presents the full text of two simulation exercises. The first, as noted above, was developed in connection with the presentation on the impact of the EU on international environmental negotiations. The second, a comprehensive multi-level strategic simulation exercise designed by Dr. Raftopoulos, is intended to encourage development of ideas and discussion in the environmental negotiation community about the possibility of developing a liability and compensation conventional regime within the Barcelona Convention system. In the Seminar this simulation served as a “laboratory” for applying, through practice, concrete aspects of the theory of negotiation as governance technique. In addition to the lectures and exercises on contemporary environmental topics presented in this Study the substantive aspects of the seminar was supplemented by lectures and exercises on negotiation theory including theories of interest based negotiation, communication theory and the psycho-social dynamics of negotiations provided by Mr. Lucien Chabason, the time of the Seminar, the Coordinator of the MAP (1993-2003), Dr. George Kamizoulis, World Health Organization and Dr. Athanassios Samaras, Political Communication Expert.